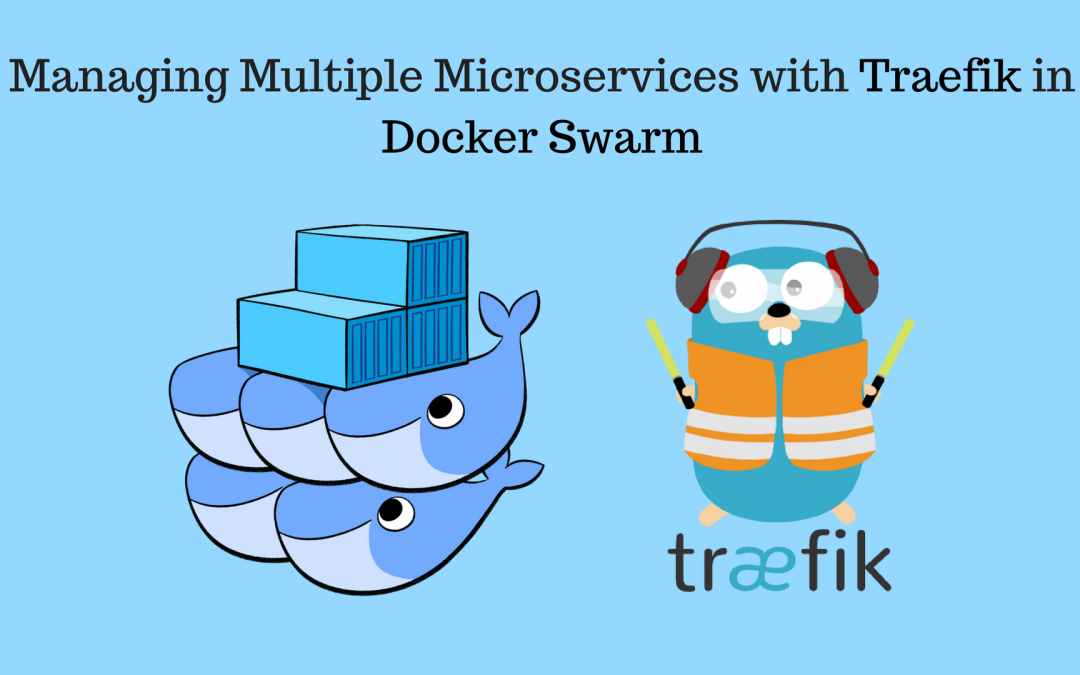 Docker's Swarm Mode is a great way to run web applications in a highly available distributed environment. Docker provides that high availability with a quorum of managers and multiple instances of the application container distributed across the workers. With the application being distributed across the workers, you have a new challenge of how to know which node to contact to reach your application. Docker has solved that with it's ingress network that publishes the port for your application across every node and then automatically routes your request to a container in the swarm providing that service, even if it's on another node.

Publishing the port for your application across all nodes in the swarm makes it easy to connect to your application, but you are left managing which application is published on which port. That's where reverse proxies like Traefik come into play. You can publish a single port that's your reverse proxy, and it automatically forwards the request to the appropriate container. Traefik is popular with Docker's Swarm Mode users because it's lightweight, handles HTTP and HTTPS requests, and most importantly, it can dynamically adjust to changes in your running swarm services.

Traefik is configured in three parts. First is the “entrypoint” which are the ports that it listens on and you publish on all nodes in your swarm. In this example, we will use port 80 for HTTP, and port 443 with HTTPS that will handle TLS termination. The second part is Traefik's “frontend” which are the rules attached to entrypoints that identify which requests to accept and where to send them. The last part is Traefik's backend which are pointers to the containers in Docker and how to connect to them. These backends are the targets attached to each frontend. Traefik allows you to prioritize these backends for failover from one container to another, but we've stuck with the default which is to round robin load balance to every matching swarm service that's available.

Instead of copy/pasting from the blog, you can clone this repo on github:

To keep this example simple, we've used self signed TLS certificates created with OpenSSL. You can replace this step with LetsEncrypt if your server if publicly reachable with a valid DNS entry, or you can use your own certificates. For this simplified example, we're going to create a “tls” directory and then run the following script:

Note that the above script is creating a certificate for localhost with the ip 127.0.0.1. You can add additional IP addresses and DNS names, or replace the ones above to match your own environment.

The important setting here is to use the overlay driver so that the network is available to containers we run in swarm mode.

The traefik.toml comments give more details on the configuration options. In brief, the above options have the following results:

With the prerequisites done, it's time to make our traefik containers in swarm mode. We are publishing 3 ports with Traefik:

Before creating the traefik container, we need to manage a few dependencies. To allow traefik to migrate between nodes in the swarm and still have access to the TLS certificates and traefik.toml file we have created, we are using docker configs and secrets. These import your files into docker's raft based internal key value store, and automatically create files inside our containers regardless of where the container is running. Prior to swarm mode, these files may have been left unencrypted on the filesystem and mounted into the container directly from the docker host. With swarm mode, mounting files from the host would require you to manually synchronize these files across all nodes in the swarm or depend on an external fileserver.

While convenient and secure, there are two downsides to the configs and secrets. The first is that these are immutable, so if you need to change a configuration file stored in a docker config you need to change the config name with a version number so that the change gets pushed. Alternatively you can delete and recreate the config or secret with the same name if it's currently unused. The second disadvantage is that configs and secrets only work with containers running in docker's swarm mode, so if developers are running containers with docker run or docker-compose they won't have access to this feature. We are developing with swarm mode, and have made versioning these part of our workflow, to get all the advantages they provide and mirror the production environment.

While creating this example, we encountered our first Traefik issue, #1957, where the path based frontend rules we will be using strip the path off of the request before the redirect is processed. We have worked around this by running an nginx container with a single configuration to redirect every request it receives to HTTPS. Once this issue is resolved, we'll be able to make a small configuration change to the traefik.toml file and remove the nginx redirect container.

The above docker-compose.traefik.yml creates the secrets, configs, and starts the traefik and nginx redirect containers. The traefik container is configured to expose ports 80, 443, and 8080 on the ingress network so they can be reached from any docker node in the swarm. To allow traefik to monitor the swarm services for dynamic configuration changes, we have mounted in the docker socket and have constrained it to run on a manager (the docker socket on workers do not have access to query swarm services). The nginx redirect container has the labels in there to configure traefik to send http requests to it. We will go into the labels in more detail in the backends discussion since nginx is a very simple backend service.

Our containers being run in the backend for this example are a collection of web servers: nginx, apache, and caddy. For each of these, we configure labels on the swarm service to dynamically configure traefik with the frontend rule and how to communicate with the container (docker network and port the application is listening on). When traefik is configured in swarm mode, these labels must be defined on the service rather than the individual containers, which is achieved by defining them in the deploy section of the compose file. The labels we are using for traefik are:

Note that in both of these docker-compose.*.yml files, we configured for 2 replicas of each container. This allows for rolling upgrades of the application. Docker will also make a best effort to place each replica on a different node in the docker swarm, minimizing the risk of a stopped node stopping the entire instance of the service. By placing a load balancer in front of the docker swarm with at least three managers, it's possible to provide an environment that will continue to operate even if a node fails.

If you've been running these commands on your own cluster of docker swarm, you can now try reaching each of the web servers by their path, and even take advantage of the port 80 redirection. Try the following if you deployed on your local development machine:

You'll see that you get redirected to the HTTPS entrypoint, and with the self signed TLS certificates you'll get a browser warning where you'll need to approve the certificate.

To view the traefik dashboard on your local development machine, go to the following:

With that, you're now ready to add your own services behind traefik by configuring your service labels and connecting it to the proxy network. There's no need to know where in the swarm your service is running or track an ever growing list of published ports.